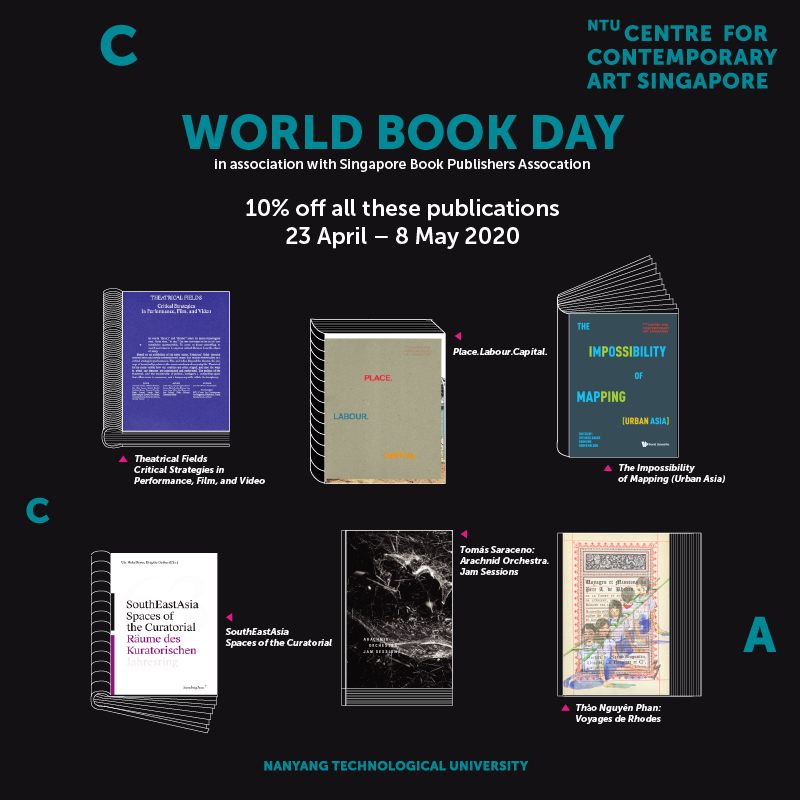 In association with the Singapore Book Publishers Association’s campaign for World Book Day, NTU CCA Singapore is offering a 10% discount on almost all our publications from 23 April – 8 May 2020.

Thank you for your participation in the World Book Day sales. The pre-order form is now closed and we will be in touch with you to arrange for payment and collection. As the Centre is temporarily closed due to restrictions to curb the spread of COVID-19, orders will only be fulfilled when we reopen. We apologise for not being able to accept online payments presently and ask for your kind patience and understanding.

Emerging from an exhibition, conference, and festival that explored architect and urban theorist William S. W. Lim’s concept of “Incomplete Urbanism” and his call for “Cities for People,” this publication juxtaposes research essays, as well as visual and textual documentation with artistic interventions and spatio-temporal maps. The volume positions Lim’s thoughts, concepts, and plans for action as that of a humanist who addresses the complex topography of an ever-changing urban Asia.

Phan’s interventions interweave different narratives that sit at the border between realism and fantasy. Reflecting upon the problematic agrarian reforms in post-war Vietnam that led to the redistribution of land and collective farming, and juxtaposing seventeenth-century travel literature with contemporary images, Phan’s works produce a palimpsest of Vietnam’s history with layers of voices from the present and the past.

Connecting cultural production and artistic research to broader political and social concerns, this critical reader on the Centre’s eponymous overarching research framework from 2013 to 2017, takes Singapore, the economic epicentre of Southeast Asia, as a point of departure to investigate the notion of place, the intersection between locality and the global, labour, and flows of capital.

An inter-species encounter between arachnids and anthropos mediated by sound, this audio publishing project is conceived as a continuation and circulation of Tomás Saraceno’s eponymous exhibition at the Centre in 2015. By making audible what we cannot hear and fully comprehend—the spiders’ vibrations—Saraceno draws attention to various modalities of expression and inter-relationality whose potentiality is yet to be valued.

This volume focuses on the practice of curating in Southeast Asia, a region experiencing a time of increased global visibility as well as nation and institution building. The political aspiration to map and shape a regional identity through historical writing and cultural planning stumbles upon a multi-layered subject difficult to grasp or define. The diversity of voices in this publication mirrors the complexity of the region itself: its various curatorial spaces, infrastructures, and political systems.

NTU CCA Singapore’s first publication, this reader stages conversations between theatre and visual arts, theoretical discourse and artistic practice juxtaposing artists and theoreticians who share a communal interest in theatricality as a critical strategy to address questions of ideology, gender, and power relations.

NTU CCA Singapore’s publications range from thematic readers related to the Centre’s overarching research frameworks, to collections of critical writing on curatorial practice and art from Southeast Asia, as well as visual and textual manifestations of artistic research.