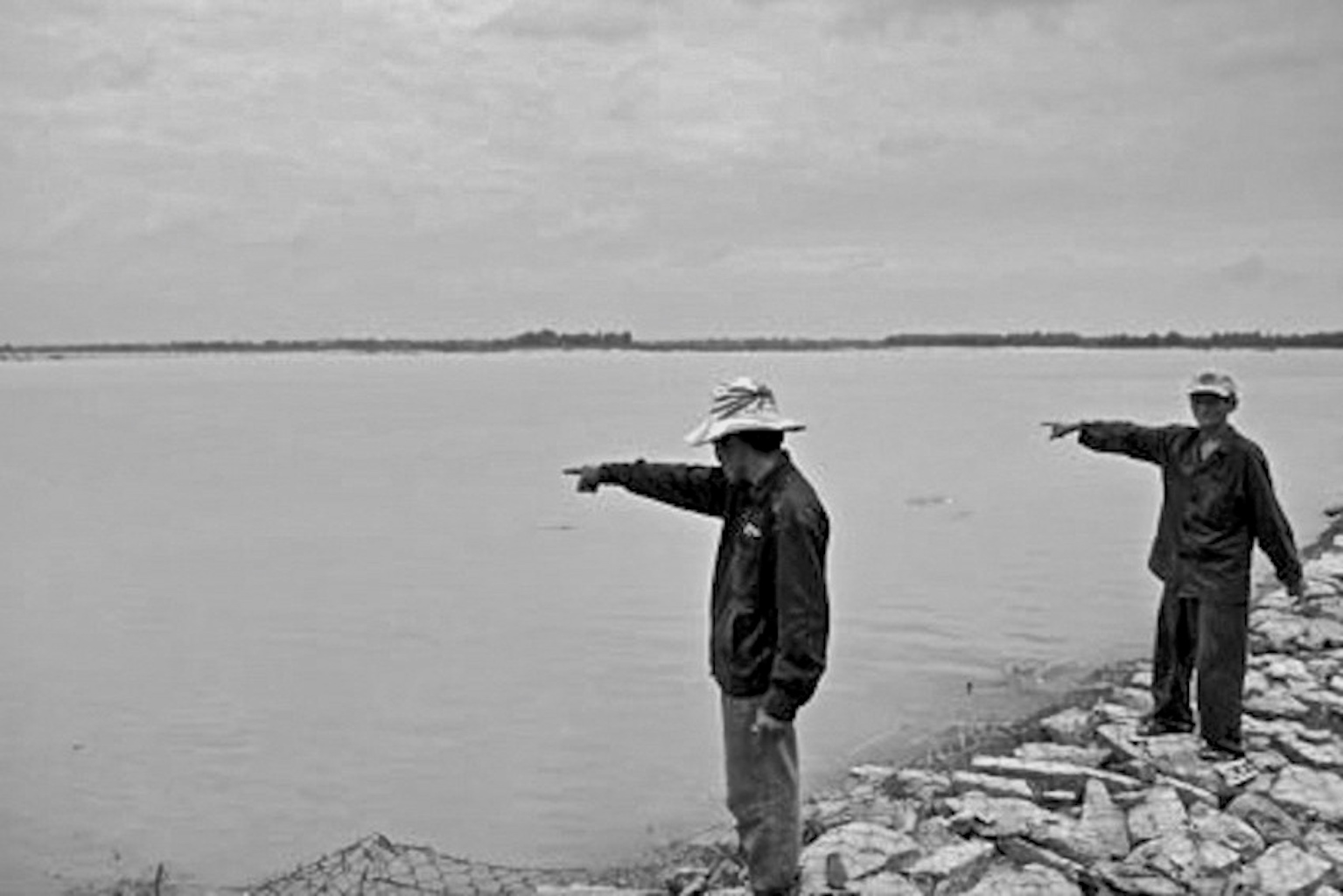 Interested in the idea of landscapes as a quiet witness to history, artist Nguyen Trinh Thi collects and compilates hundreds of images in which anonymous persons are portrayed pointing towards seemingly empty locations within a landscape. Taken by innumerable Vietnamese press photographers, figures are always captured in the same position, gesturing towards the landscape to indicate a past event, the location of something gone or something lost or missing. We are left with no information about the people and their specific thoughts or feelings, only their repetitious sameness of pointing towards an “evidence” within the silent landscape.

The land bearing witness to the volatile transitions in our geo-political, cultural, and social systems questions the extent of which unsustainable and environmentally-taxing practices effect the environment. Does a landscape harbour ill-feelings towards events and circumstances that have caused it harm? And if it were to break its silence, what forgotten stories would it reveal? Rather than disregarding the land, Nguyen’s photographs suggest these environments contain a plethora of unspoken histories.

Nguyen’s works are built upon and are often generative of one another. Parallel to this presentation, two of her films, Vietnam the Movie (2015) and Fifth Cinema (2018), will be on view in The Single Screen from 28 May – 9 June and 11 – 23 June respectively. This screening is part of the Centre’s Film Screening Programme: Faces of Histories, 14 May – 17 July 2019.

Nguyen Trinh Thi (Vietnam) is a Hanoi-based filmmaker and moving image artist. Her diverse practice—traversing boundaries between film and video art, installation and performance—consistently engages with memory and history, and reflects on the roles and positions of art and artists in society and the environment. Nguyen studied journalism, photography, international relations, and ethnographic film in the United States. Her films and video art works have been shown at festivals and art exhibitions including Asia Pacific Triennale of Contemporary Art (APT9) in Brisbane (2018); Sydney Biennale 2018; Jeu de Paume, Paris; CAPC musée d’art contemporain de Bordeaux; the Lyon Biennale 2015; Asian Art Biennial 2015, Taiwan; Fukuoka Asian Art Triennial 2014; Singapore Biennale 2013; Jakarta Biennale 2013; Oberhausen International Film Festival; and the Rotterdam International Film Festival. Nguyen is founder and director of Hanoi DOCLAB, an independent centre for documentary film and the moving image art since 2009. She previously showed at NTU CCA Singapore in the exhibition Ghosts and Spectres – Shadows of History (2017).

Image caption: Nguyen Trinh Thi, Mr. Nguyen Tan (on the left) and Mr. Huynh Ngoc Anh (of Phuoc My commune) are pointing to the direction of the river where dozens of people’s homes and gardens have been swallowed by the “patron god of the river.”, from Landscape Series #1, 2013, 20 photographs, colour and black-and-white; 35mm slide projection, 77 slides. Courtesy the artist.