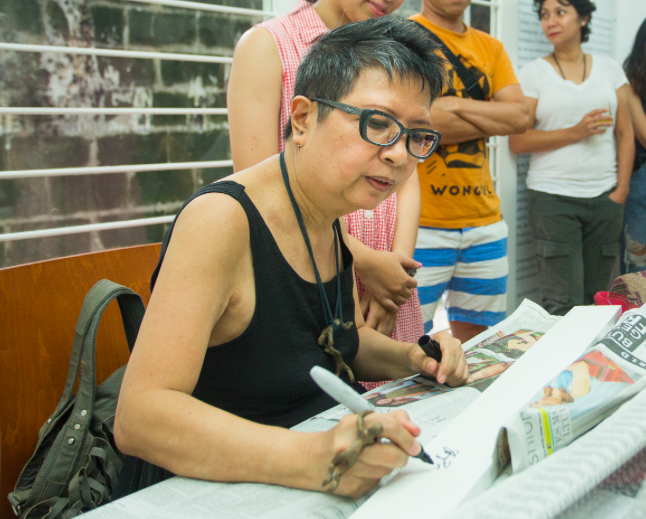 Talk: Toward a Practice of Institutional Critique by artist Judy Freya Sibayan

Judy Freya Sibayan looks back on 45 years of artmaking, with the first 20 years as the basis of her work of Institutional Critique. Taking the subject position of the “ex-centric” (the inside-outsider), she parodies the institution of art. It is here she is able to gain agency by enacting auto-critiques of the institution to which she belongs. She has done parodic performances of the gallery (Scapular Gallery Nomad, 1997–2002), the museum (Museum of Mental Objects, 2002–07), the art archive (The Community Archives, 2010), and the art consultancy (Performance Art Consultancy: Life, Art, Criticality, 2018) to name a few. The talk will be followed by a discussion between Sibayan and curators Ute Meta Bauer and Khim Ong.

Judy Freya Sibayan (Philippines) is a conceptual artist living and working in Manila. She taught at De La Salle University for three decades and has exhibited and performed in museums and galleries worldwide. Former Director of the erstwhile Contemporary Art Museum of the Philippines, she has been the Museum of Mental Objects since 2002, a life-long parodic performance. She is also Co-founding Editor and Publisher of the online Ctrl+P Journal of Contemporary Art and the author of The Hypertext HerMe(s).

Ute Meta Bauer (Germany/Singapore) is the Founding Director of the NTU Centre for Contemporary Art Singapore; Professor at the School of Art, Design and Media, Nanyang Technological University (NTU ADM); and an editor of the Afterall journal. Previously she was Professor and Dean of the School of Fine Art at the Royal College of Art, London (2012–13) and Associate Professor at the Massachusetts Institute of Technology, Cambridge, MA, where she served as the Founding Director of ACT, the Program in Art, Culture, and Technology (2009–12) and as Director of the MIT Visual Arts Program (2005– 09) at MIT’s School of Architecture and Planning. Bauer worked with Jef Geys on his Documenta 11 project.