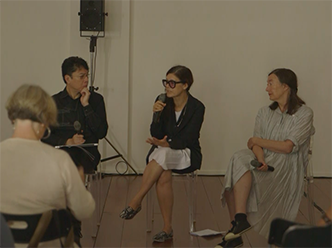 Life or Theatre? Events so far…

“Events so far… This phrase promises continuity. In our daily serial lives we expect a recap of previous episodes to help us find our way into the story. Yet in claiming to control a plot and its characters by specifying their time, place and identity, this phrase turns out to be a manifestation of seriality itself: the only thing certain is that the narrative elements will reappear. It is then a matter of the theatricality of their reappearance whether or not they disengage from representation and its narrative, and enter a free and indirect relation between life and theatre. “

Dr. Eva Meyer is a writer and filmmaker based in Berlin. She currently teaches at Zurich University of the Arts. Together with Eran Schaerf, she is the film director of She Might Belong to You features in Theatrical Fields.

This talk will reflect on the fascination of artworks in Theatrical Fields with the phantasmatic past. In providing a brief theoretical overview of “the politics of theatricality,” Murray will reflect on the exhibition’s screenic re-possession of cinematic characters, buried stories, and influential texts in a way that challenges the historical groundings of theatricality in the ethnocentric certainty of culture and law.

Timothy Murray is Director of the Society for the Humanities, Curator of the Rose Goldsen Archive of New Media Art, Professor of Comparative Literature and English at Cornell University, and Co-Director of the Cornell/East China Normal University Center for Comparative Culture. He is editor of Mimesis, Masochism & Mime: The Politics of Theatricality in Contemporary French Thought (Michigan, 1997), and is the author of several publications including Digital Baroque: New Media Art and Cinematic Folds (Minnesota 2008); Drama Trauma: Specters of Race and Sexuality in Performance, Video, Art (Routledge, 1997).

Ong Keng Sen is festival director of the new Singapore International Festival of Arts (SIFA) and artistic director of TheatreWorks Singapore (on-leave). He founded and curated the In-Transit festival for the Haus der Kulteren der Welt in Berlin from 2001-3. He has taught in many universities including Das Arts, UCLA, the University of Amsterdam and the National University of Singapore. He is also the founder of Arts Network Asia. A Fulbright Scholar, Keng Sen was awarded the prestigious Fukuoka Prize 2010 for his work in Asian contemporary performance.