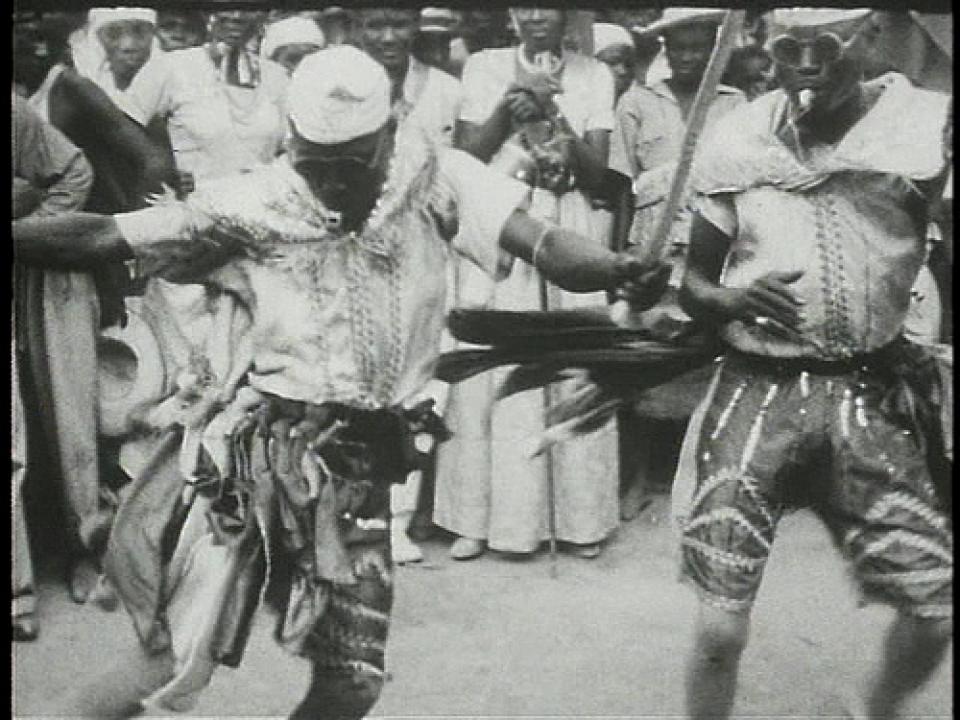 For Jean Rouch’s landmark film The Mad Masters, the French filmmaker himself coined the term “ethnofiction” due to the blending of both documentary and fictional aspects. Rouch takes his viewers to the city of Accra (West Africa) where he follows the Hauka movement and their religious and ritual proceedings, consisting of mimicry and dancing to become possessed by British Colonial administrators. The work caused a highly political debate since on one hand it was considered offensive to colonial authorities because of the Africans’ blatant attempts to mimic and mock the “white oppressors” and, on the other hand, African students, teachers, and directors found the film to perpetrate an “exotic racism” of the African people. An outstanding film that until today is one of the classics to be revisited and discussed.

Between 1947 and 1951 the experimental filmmaker Maya Deren spent significant periods of time in Haiti to make a film about Voodoo rituals and rites. The material she shot was left unedited until after her death when it was assembled into the film Divine Horsemen: The Living Gods of Haiti. Deren’s work reveals the ongoing merging of art and ethnography, one of the legacies of Surrealism, also standing as an important cultural record of Haitian Voodoo—a religion based on West African beliefs and practices, combined with aspects of Roman Catholicism. The contrasting of Haitian dance with ‘non-Haitian elements’ in a series of dream-like sequences testifies to Deren’s Surrealist interest in alternative realities. Gradually, the focus shifted from dance to the complex nature of Haitian ceremonies, while celebrating Haiti for its hybrid culture as well as for its symbolic importance as the political site of a successful slave revolution, which resulted in Haiti becoming the first modern black republic.

These Screenings are part of the public programme of Ghosts and Spectres – Shadows of History.

BIOGRAPHY
Jean Rouch (1917-2004, France) was a legendary documentarian and ethnographer known for his work focused on West and Central African communities. He attended possession ceremonies of the Songhay religion, documenting them and showing the films at the Musée de l’Homme in Paris. Rouch began screening his films in Africa, and incorporating comments from his films' subjects into his work, thus developing the ideas of Robert Flaherty about "shared anthropology” that became central to his practice. The series done with Germaine Dieterlen documenting the seven-year cycle of Dogon Digui rituals that occur every 60 years is regarded as one of his most significant contributions. Inventor of “ethnofiction,” Rouch explored themes of colonialism and racism in a playful and poetic way. Maya Deren (1917-1961, Ukraine/United States) was one of the most important American experimental filmmakers and entrepreneurial promoters of the avant-garde in the 1940s and 1950s. Deren was also a choreographer, dancer, film theorist, poet, lecturer, writer, and photographer. Her influence, especially in independent film, has not only endured but also increased in the decades following her death. She combined her interests in dance, Haitian Vodou and subjective psychology in a series of surreal, perceptual, black and white short films. Using editing, multiple exposures, jump cutting, superimposition, slow-motion and other camera techniques to her fullest advantage, Deren creates continued motion through discontinued space, with the ability to turn her vision into a stream of consciousness. Dr Marc Glöde (Germany/Singapore) is Assistant Professor, School of Art, Design and Media, NTU, who regularly contributes to NTU CCA Singapore’s programmes. He received his PhD from the Free University of Berlin, and has taught at the FU Berlin, Academy of Fine Arts Berlin, and ETH Zürich. His research focuses on the intersection of art, architecture, and film, and his curatorial projects include STILL/MOVING/STILL – The History of Slide Projection in the Arts, Belgium, (Re-)locating the Self, Hamburg, and Filmic Reflections on the Document, Bonn. He was senior curator for Art Basel’s film programme (2008-2014). Publications include Farbige Lichträume (2014), and co-editor of Synästhesie-Effekte (2011) and Umwidmungen (2005). His writing has been published in Fantom, Osmos, Texte zur Kunst, Parkett, and Art in America.