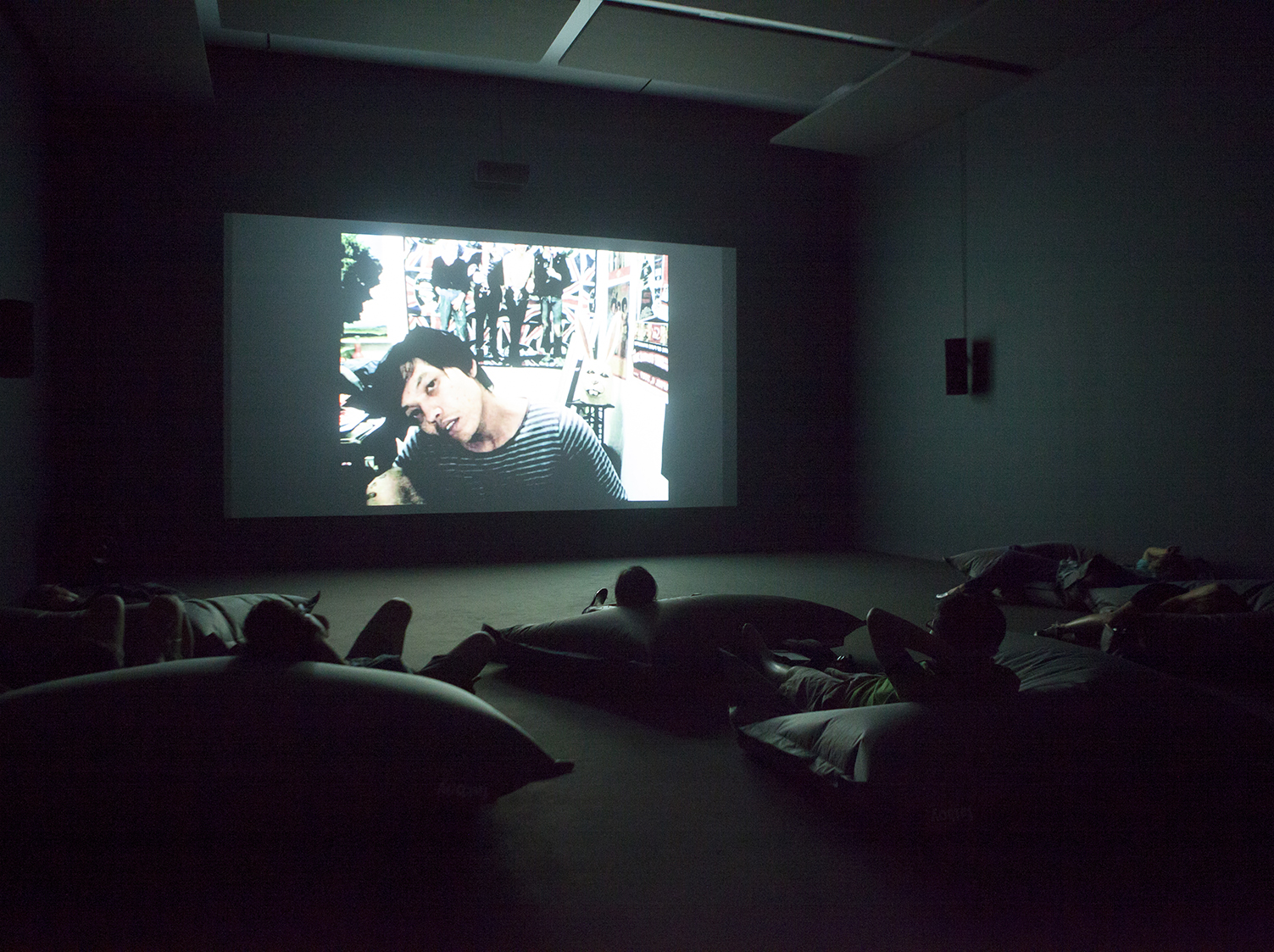 Screening programme: The Margins of Exhibition curated by David Teh

The Margins of Exhibition is a selection of artist-made videos gathered in response to the curatorial proposition of The Disappearance. The programme displaces our focus from the main game – the artwork, the exhibition or in cinema, the pro-filmic or a feature presentation – in favour of what is peripheral. Neither inside nor outside, there is much more to the frame than meets the eye.

Anthea Behm, Adorno / Bueller (2011), is based around two scripts: one adapted from Frankfurt School Philosopher Theodor Adorno’s Aesthetic Theory (1970), and the other from John Hughes’ Hollywood movie Ferris Bueller’s Day Off (1986). Filmed on location in the Art Institute of Chicago, the video stages a dynamic encounter between both texts via a series of performances that presents and merges the two scripts. Simultaneously dramatizing and destabilizing the categories that continue to inform our conceptions of social, cultural and artistic production, the video formally manifests the contradictions embedded in such categorical divisions, and the possible ways in which they are necessarily maintained or dissolved. The resulting critical intervention into the accepted ‘sense’ of each text is at once confounding yet clarifying.

Anthea Behm is an Australian artist whose work has been exhibited at the Dedalus Foundation, New York; the Dallas Contemporary, Dallas; the Museum of Fine Arts, Houston; and the Kiasma Museum of Contemporary Art, Helsinki.

Sherman Ong, Tickets (2010), is a film is about cinema and the slippages between documentary and fiction. It dwells on the idea of acting/re-acting/reprising real and imaginary roles, and touches on the themes of diaspora, migration, displacement, identity and the sense of belonging.

Sherman Ong (b. Malaysia) is an award-winning filmmaker, photographer and visual artist. His practice has always centred on the human condition and our relationships with others within the larger millieu. Winner of the 2010 ICON de Martell Cordon Bleu Photography Award, Sherman has premiered works in art biennales, major film festivals and museums, including the Venice, Singapore and Jakarta Biennales, Mori Art Museum Tokyo, Fukuoka Asian Art Museum, Martin-Gropius-Bau Berlin, Centre Pompidou Paris, Institute of Contemporary Arts London, Rotterdam International Film Festival among others.

Wok the Rock, Vertical Horizon (2010), “takes an observational stance to webcam aesthetics, abiding by the peculiar durée of networked video, at once domestic and, in its formatting of the act of viewing, social or even viral. The work is a reference to an amateur porn video made by an Indonesian rock star (Ariel, frontman of the band Peterpan) on his cell phone, starring himself and a TV soap starlet named Cut Tari. Everyone you meet in Indonesia has seen this video, distinctive for its 90-degree orientation, and for feats of cinematographic agility on the part of its actor-director. Ariel got three years in prison for his efforts, under a new and highly controversial anti-pornography law. Indonesia, home to the world’s biggest Muslim population, is a progressive place in many ways, but conservatives have made gains by drumming up hysteria over modern society’s changing attitudes. Vertical Horizon offers a succinct, specular portrait of a nation undergoing rapid cultural change.” (David Teh)

Wok The Rock lives and works in Yogyakata, Indonesia. His works span across media from photography, video, graphic design, music production to the internet and digital culture. In 2002 he co-founded Ruang MES 56, a contemporary photography collective. He is an active player in underground music scene in Yogyakarta; producing music with local artists, running a net label Yes No Wave Music, curating music gigs in Yes No Klub and writing for Free Music Archive and Xeroxed.

Emile Zile, Western Digital (2013), is the result of a series of recorded interviews and shot video-s with Buddhist monks, tourist photographers and locals in Laos. These recordings turned into an observational documentary looking at the morning ritual Tak Bat, in which Buddhist monks receive offerings of food from locals. This has become a well-known tourist attraction. The work observes the interaction between the various stakeholders. The giving of rice. The taking of photographs. The Buddhist principles of mindfulness and attempting to transcend time and the photographer’s impulse to embalm the moment.

Nitipong Thinthubthai, Chai wan ni (now showing) (2009), “For many villagers in Thailand’s far northeast, the cinema is still mobile. At its fringes, the networks of the Spectacle are yet to displace the rhythms of the Festival. Nitipong’s chai wan ni offers a sentimental glimpse of the rich and enduring traditions onto which the moving image has been grafted in Southeast Asia.” (David Teh)

Nitipong Thinthubthai lives in Bangkok. After graduating from the Saowapa School of Art and the Pohchang Academy of Arts, he began working as prop assistant for commercials and films. He joined the Kick the Machine film company and became the prop master for many of Thai filmmaker Apichatpong Weerasethakul’s films. Several of his own short films were shown in international film festivals including Rotterdam, New York and Hamburg.