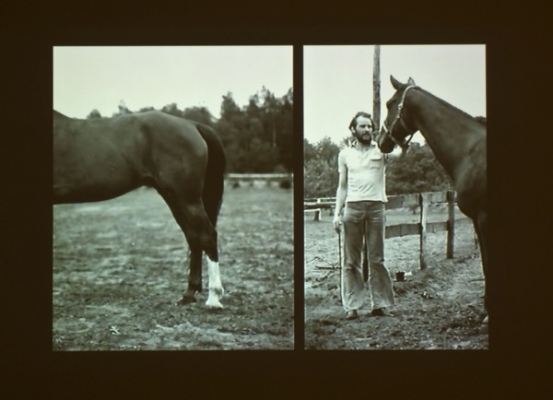 Variously described as the “ultimate film” and an “anti-film,” Een dag, een nacht, een dag…, (Day and Night and Day…) (2002) is a 36-hour-long projection of a compilation of thousands of photographs from Jef Geys’s archive. Photography and the archive feature heavily in the artist’s practice, which concentrates on the connection between art and everyday life. In 1998, Geys published Al de zwart-wit foto’s tot 1998 (All the Black-and-White Photographs until 1998), a five-centimetre thick volume containing approximately 40,000 photographs produced between 1950 and 1998, in random order and in the form of contact prints. The photographs, which presented a wide range of subjects and abstained from selection or interpretation, presented an inventory of the artist’s life, and speaks to the importance of photography to Geys as a means to record, collect, and document life. In 2002, Geys extended this book project through the film Een dag, een nacht, een dag…, (Day and Night and Day…), which was presented at Documenta11 at Kassel in 2002. It illustrates a similar approach to photography as the ultimate medium to represent the vernacular, and offers an archive that oscillates between the private and the public, art and the everyday. Though the film will be hardly seen in its entirety, its dramatic sequence of pictures emphasises the flow of time.

Jef Geys (1934–2018, Belgium) is among Europe’s most respected yet underacknowledged artists. Producing artwork since the 1950s, Geys’s practice probes the construction of social and political engagement, and his work radically embraces art as being intertwined with everyday life. Geys graduated from the Antwerp Arts Academy before settling in Balen in the Kempen region of Belgium, where from 1960 to 1989, he taught art at a state school, focusing on educational experimentation in the arts. Since the late 1960s, Geys, who was also part of the Mail Art movement, has been the editor and publisher of his local newspaper, the Kempens Informatieblad, and subsequently produced them in line with his exhibitions. He is known for his meticulous archive of his work, which in turn became generative of other works.

This screening is part of the exhibition Jef Geys Quadra Medicinale Singapore.