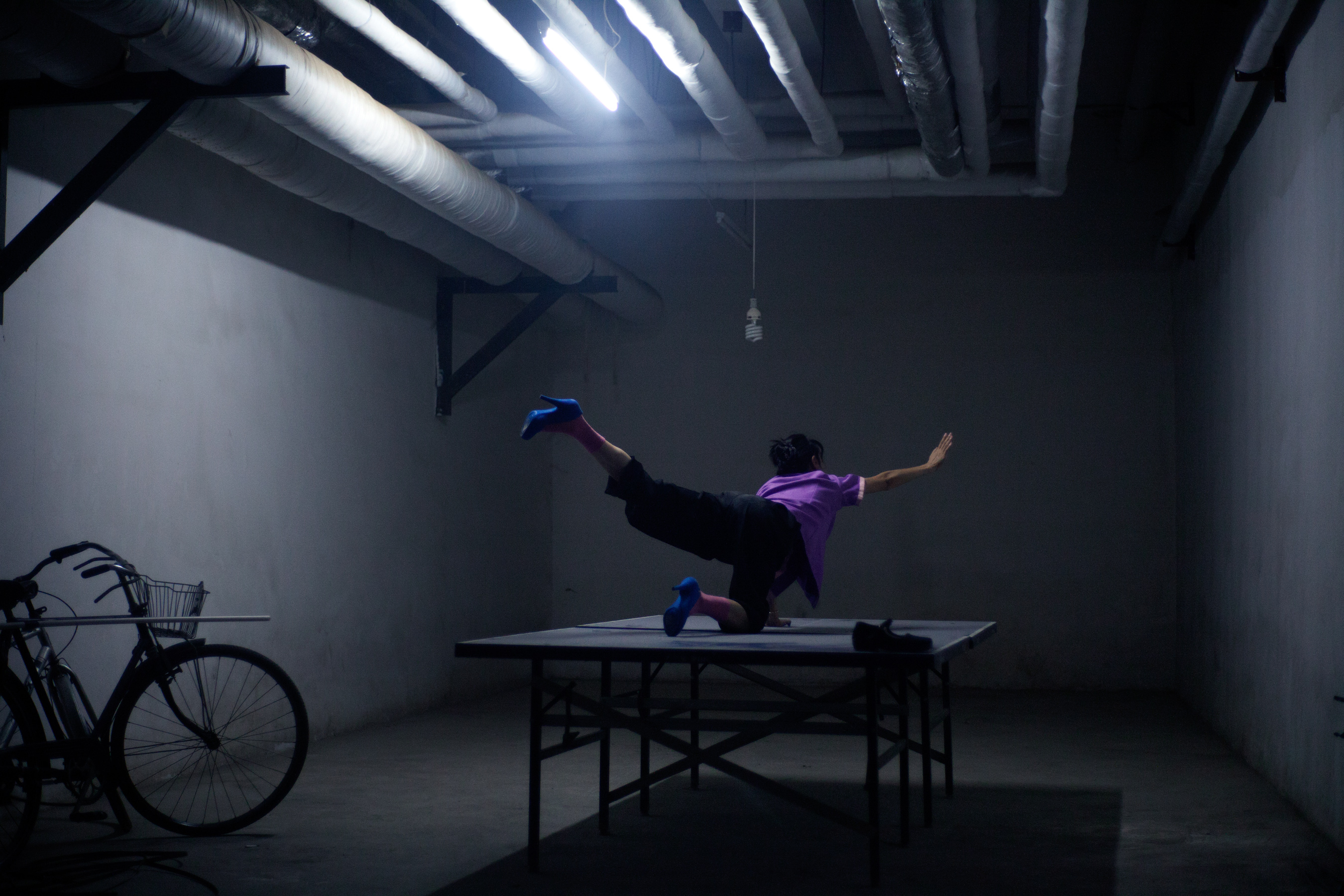 Untitled (Festival), Liu Chuang, China, 2011, 5 min
Untitled (Festival) is set in an urban context, documenting a journey of an invidividual through a city filled with rubble and debris. It begins with the individual picking up a sheet of paper, lighting it up on fire and then throwing it to the ground. The act becomes repetitive, a commentary to the normalcy of accepting the conditions imposed on them without protest.

Autumn Moon, Clara Law, Hong Kong, 1992, 108 min
Weary of work, Tokio comes to Hong Kong looking for good food. He meets a 15 year-old girl called Wai. Her parents are in Canada dealing with immigration matters, as well as buying a house and sending her brother off to university. Wai is left behind in Hong Kong with her 80 year-old grandmother and her cat. Tokio finds himself more interested in the grandmother’s cooking. Wai, on the other hand is secretly in love with a boy in her school but is reluctant to show her passion, for fear that she is unable to handle the situation when she has to emigrate.

After Reality, Zhou Tao, China, 2013, 14 min
After Reality was filmed mostly in Guangzhou, China and in some parts of Paris, France, in abandoned urban or rural surroundings. By creating alternating images throughout the editing process, Zhou Tao intends to create a third space where the gaze rests on the biodiversity of these escheated areas, as to the human body that performs on it. The “reality” of an urban life is conditioned by the cause of urban planning, where ideologically, everything is under human control. After-reality exposes the beauty of the luxuriant subtropical vegetation, an alienation from the cities, creating a feel of wonder that is beyond narration.

She Said Why Me, May Fung, Hong Kong 1989, 8 min
A woman travels, blindfolded, from an ancient countryside temple to a bustling city. Her surroundings change, but her sense of unease lingers. The film takes the female perspective to combine the past and present, expressing a sense of anxiety that permeated Hong Kong during that particular moment in time.

Jungle of Desire, Wong Ping, Hong Kong, 2016, 6 min 50 sec
An impotent husband, an unsatisfied wife and a megalomaniac policeman. A perfect ecosystem in the concrete jungle. A jungle where you can be at grip with lust and no moral laws.

A surprise film (145 min) will be screened

Haze and Fog, Cao Fei, China, 2013, 47 min
Haze and Fog is a new type of zombie movie filmed in modern China. The film explores the ways of the collective consciousness of people living in the time of “magical metropolises”. It is a term Cao Fei describes as emerging from seemingly tedious, mundane, day-to-day life where a magical reality is created through struggles at the tipping point between the visible and the invisible.

What Time Is It There?, Tsai Ming Liang, Taiwan, 2001, 116 min
After the death of his father, Shiao Kang begins to fear darkness. He locks himself in his room and sleeps with the lights on. He believes that his father’s ghost is still around.

In the day, he sells watches on the crossover bridge of the Taipei Train Station. A woman by the name of Shiang–Chyi, who is about to travel abroad, comes to him to buy a watch. She takes a liking on Shiao Kang’s own watch and is adamant on buying it. According to traditional beliefs, within the period of seven weeks of mourning, a property should never being transferred as it would bring bad luck to the receiver. The story unfolds between the two individuals as their realities start to shift, alternating their experiences with one another.

Wong Ping (Hong Kong) is one of Hong Kong’s most exciting emerging artists. His animations have been commissioned by M+, NOWNESS as well as Prada and was recently the receipient of Perspective’s ‘40 under 40’ award. Wong has held residency at the Chinese Centre for Contemporary Art (CFCCA) and his animation films has been exhibited and presented at numerous festivals internationally. Wong’s work is held in several permanent collections including M+, Hong Kong.

May Fung (Hong Kong) is a filmmaker, video artist, curator, and critic. Her works take shape in a personal and political sphere, touching upon issues such as gender, environment, and cultural landscape. She works in moving image, installation, and performance where she has worked with using theatre as an experimental platform.

Clara Law (Hong Kong) studied film at the National Film and Television School in England after graduating from the Hong Kong University in English Literature. Her internationally acclaimed features including Temptation Of A Monk (1993), Floating Life (1996) The Golldess Of 1967 (2000) Letters To Ali (2004) and Like A Dream (2010) have won her numerous prestigious awards and have been presented in film festivals worldwide. Her most recent work, Drifting Petals, a bold and experimental feature/essay film is currently in post-production.

Cao Fei (China) mixes social commentary, popular aesthetics, references to Surrealism, and documentary conventions in her films and installations. Her works reflect on the rapid and chaotic changes that are occurring in Chinese society today. She has participated in a number of international biennales including Shanghai Biennale, Taipei Biennale, Biennale of Sydney, Istanbul Biennale, Yokohama Triennale, and Venice Biennale. She has also exhibited Her works and projects were exhibited at the Serpentine Gallery, Tate Modern, London; New Museum, Guggenheim Museum, MoMA, New York; foundation Louis Vuitton, Palais de Tokyo and Centre Pompidou, Paris.

She was recently the receipient for the 2016 Best Young Artist by the Chinese Contemporary Art Award (CCAA).

Tsai Ming-Liang (Malaysia) is a son of Chinese parents who were farmers and operated a noodle stall in Kuching, Malaysia. Tsai was raised mainly by his maternal grandparents, who loved watching films, introducing him to popular Hong Kong, mainland Chinese, Malay, Indian, and American cinemas from an early age.

His films including, What Time Is It There?, Goodbye, Dragon Inn (2003), The Wayward Cloud (2004), amongst others, have won numerous accolades from film festivals around the world.

Yung Ma (Hong Kong/France) is currently Curator of the Contemporary Art and Prospective Department at the Centre Pompidou in Paris, France. Formerly Associate Curator of Moving Image at M+ in Hong Kong, he had been part of the core curatorial team for M+ since its inception in 2011, and twice co-curator of the Hong Kong Pavilion at the Venice Biennale (2013 and 2009). At M+, he looked after the institution's moving image portfolio, helping to define and build the collection while conceiving the ongoing M+ Screenings series and the exhibition Mobile M+: Moving Images (2015).