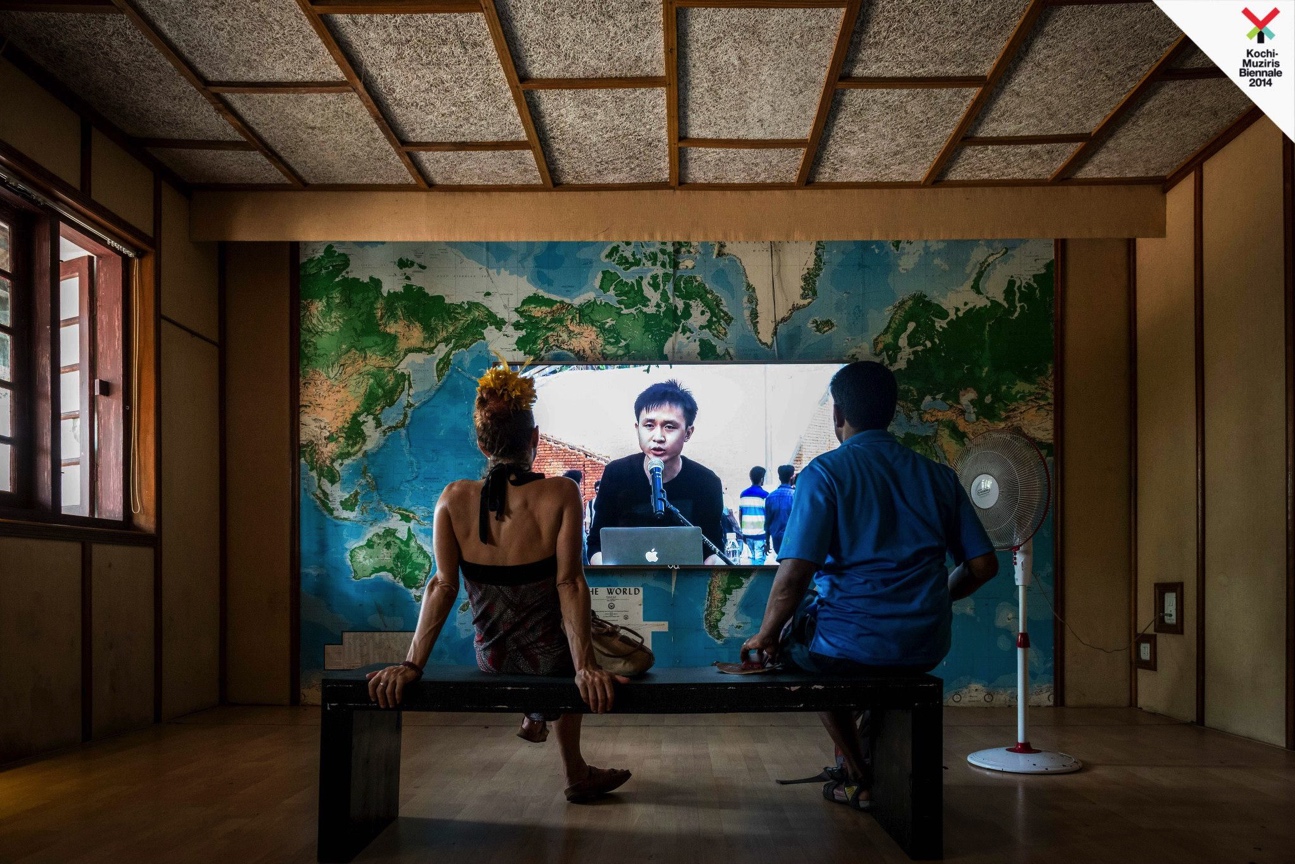 Residencies: OPEN offers a rare insight into the often introverted sphere of the artists’ studio. Through showcasing discussions, performances, research and works-in-progress, Residencies: OPEN profiles the diversity of contemporary art practice and the divergent ways artists conceive artwork with the studio as a constant space for experimentation and contemplation.

As part of his residency at the NTU CCA Singapore, Antariksa researches the history of the Japanese Occupation (1942-1945) in Singapore. He is especially interested in collecting historical evidence of the propaganda strategies pursued by the occupiers and compare them with the forms of resistance and alternative visual strategies developed by the artists at the time. This project is part of a wider study on the history of art collectivism in Asia under the Japanese Occupation.

The presentation of archival material and images in his studio has been made possible thanks to the National Archives of Singapore.

The Library of Unread Books is Heman Chong’s long-term project: a members-only reference library made up of donated books that are unread by their previous owners. The cost of a lifetime membership to the library is the donation of a single unread book. In keeping with the artist’s intimate longing for a space to go to in the dead of the night to encounter books he has never thought of reading, “night passes” will also be issued for visitors and the Library will be open for 24 hours every Friday night from 7.00pm to 7.00pm the next day.

Chong is a Singaporean artist, writer, and curator whose practice develops across a variety of media. He often works as a facilitator of situations in which new narratives and modes of intellectual exchange are enacted to rethink conventional modes of sharing and transmitting knowledge. Since 2003, he has been interested in negotiating public space as a site of speech. For his six-month research at the NTU CCA Residencies Programme, he intends to turn his studio into an artist-run space where other artists can present their works, gather for discussion, and find a quiet space for contemplation.

Produced during a residency on-board a transatlantic vessel, the video interweaves two layers of time experienced by the artist during the month-long journey: that of being “in-residence” and that of being “on expedition”. Two literary characters serve as points of reference for the film’s invisible protagonist: the colonial officer Percival from Virginia Woolf’s The Waves (1931) and from Italo Calvino’s novel Mr Palomar (1983). Exploring the dissonance between the sense of nausea experienced by the artist during the residency and the scientific scope of the expedition, the film muses upon representational technologies that turn the natural world into an image.

Ho Rui An is an artist and writer who works at the intersection of contemporary art, cinema, performance, and theory. He writes, talks, and thinks around images investigating their sites of emergence, transmission, and disappearance within the contexts of cultural production. Recently he has focused on the aesthetic form of the “lecture performance” to explore the relationship between art, research, and the circulation of knowledge. During his residency at NTU CCA Singapore, Ho intends to study the aesthetics of “futurecraft” and of “horizon scanning” programmes run both by the state and private entities.

Since 2012, Ato Malinda has been working on a series of drawings that relate to her innermost feelings and fantasies about gender-related issues. Often inspired by events in her life and in the life of her friends, the drawings outline half-human, half-animal creatures caught up in intimate situations and pensive poses.

Mami Wata was a water spirit worshipped in Africa long before the arrival of the Europeans. In the 1880s a German hunter married a Southeast Asian woman and brought her to Hamburg where she performed in Völkerschau (human zoo) as a snake charmer. A lithograph of hers was reprinted in Bombay in 1955 and eventually came to West Africa where it was recognised as a portrait of Mami Wata. Re-enacting the arrival of the image in Africa, the artist reflects on the complex patterns of exchange and contamination that determine cultural identities.

The work of Malinda encompasses performance, drawing, painting, installation, video, and ceramic sculpture and investigates the nature of African identity, contesting notions of authenticity as well as fixed assumptions about gender and sexuality. During her residency at the NTU CCA Singapore, she is conducting archival research on the Tang shipwreck — occurred 380 miles off the Singapore Strait around 830 CE — to explore concepts of hybridity and globalisation in relation to Singapore’s history of sea trading and porcelain manufacturing.

With a formalistic reference to Dan Flavin, seven fluorescent tubes are arranged in a grid structure that propagates different shades of white in the space. The spectrum of white lights are in different colour temperatures, which were sampled from various social spaces in Singapore, from polished restaurant, luxury hotel, to industrial buildings and dormitory of migrant workers.

As a visual artist and a film maker, Bo Wang observes contemporary urban landscapes that are undergoing intensified processes of transformation and excavates the power structures and cultural anxieties related to these accelerated forms of transitions. His work depicts provocative portraits of China examining the ways in which the State retains its authoritarian way of rule while pursuing capitalism. For his residency at NTU CCA Singapore, Wang is researching the politics of space, issues of territorial expansion, and the social implications surrounding the pursuit of sand in Singapore where 22% of her land mass has been reclaimed from the sea through sand acquired from neighbouring countries.


Antariksa (b. 1975, Indonesia) is a historian, a researcher, and the co-founder of KUNCI Cultural Studies Center in Yogyakarta, Indonesia. He has conducted extensive research on Indonesian art, culture, and history, and is the author of Tuan Tanah Kawin Muda: Hubungan Seni Rupa-LEKRA 1950–1965 (The Linkage Between the Arts and the Institute of People’s Culture in Indonesia 1950–1965) published in 2005 by Yayasan Seni Cemeti, Yogyakarta, Indonesia.