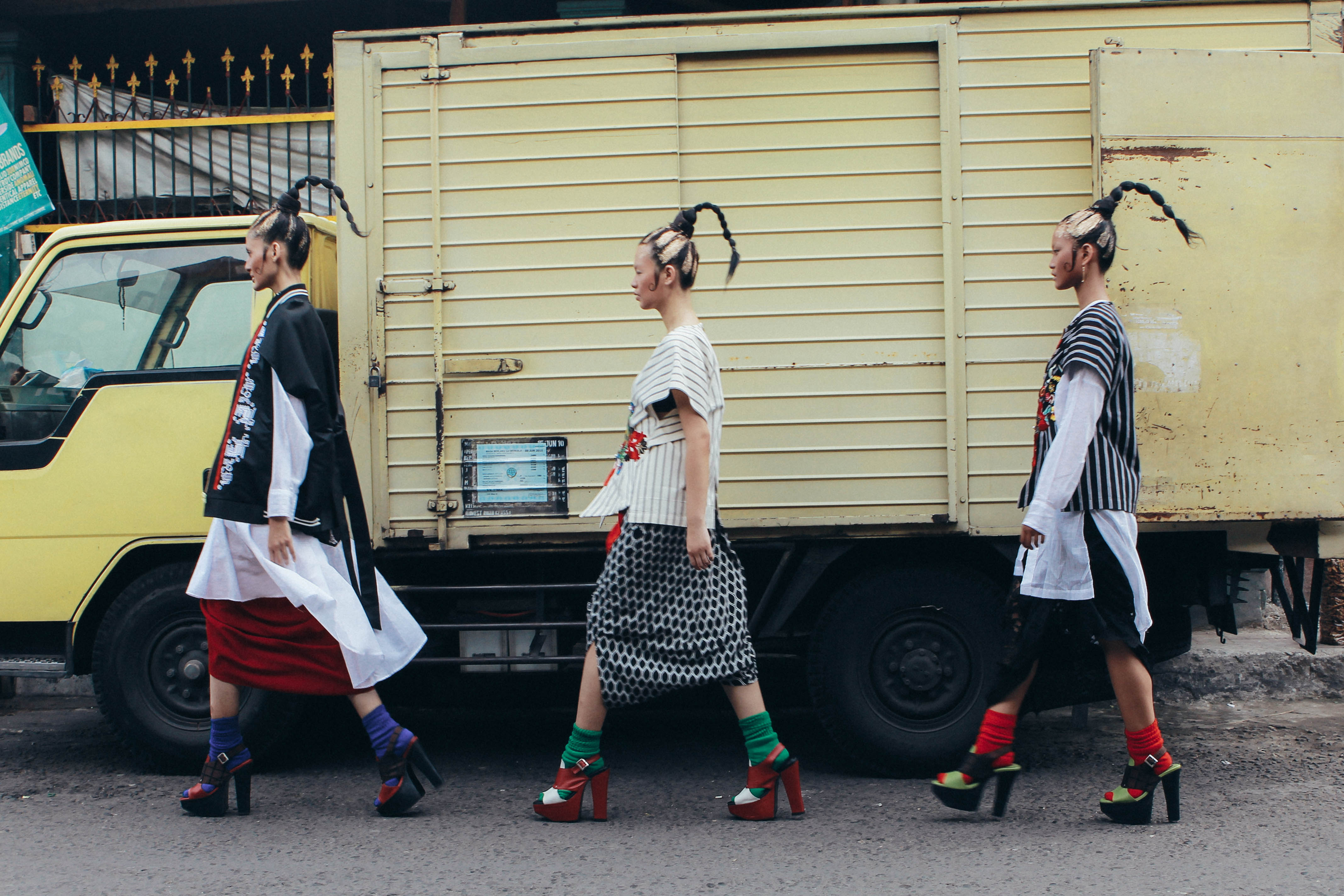 Datang untuk Kembali (Arriving to Return) is a collaboration between artist duo indieguerillas, fashion designer Lulu Lutfi Labibi, and music director Ari Wulu. The performance will be presented in the form of a procession of 20 model-performers, moving along a designated route from the exhibitions block of NTU CCA Singapore to various locations in Gillman Barracks, and ending outside Mizuma Gallery. This procession mimics Sekaten, a traditional Javanese ceremony commemorating the birthday of prophet Muhammad that was started by Sultan Hamengkubuwono I (1755–1792), in the alun-alun (city square) of Yogyakarta. The main gunungan (mountain)—which is carried around in the procession as a symbol of wealth and prosperity—will be made of a pile of clothing to be picked and worn by the model-performers as they walk along the designated route. These clothes will be from the “_hYp3<y<lu5_” collection by Lulu Lutfi Labibi in collaboration with indieguerillas. Inspired by our constant need to seek for something that is “hype” at the moment and the never-ending cycle of consumption, this collection features upcycled garments made of second-hand clothes from Singapore found at awul-awul stores in Yogyakarta, Indonesia. The soundtrack for this performance will be created by Ari Wulu.


indieguerillas (Indonesia), founded in 1999, is an artist collective based in Yogyakarta, Indonesia, comprising of Santi Ariestyowanti and Dyatmiko “Miko” Bawono. Trained in visual communication and interior design respectively, both graduated from the Indonesian Institute of the Arts in Yogyakarta, Indonesia. In addition to being known for their interest in folklores, indieguerillas is also recognised for employing visual effects and intermedia experimentation in their works.

Lulu Lutfi Labibi (Indonesia) studied textile craft at the Indonesian Institute of the Arts in Yogyakarta, Indonesia. In 2012, he launched ""LULU LUTFI LABIBI"", a ready-to-wear fashion label that promotes the use of Indonesian traditional textiles such as lurik, tenun, and batik in a more up-to-date look. Through working directly on the body without deliberate creation of additional patterns, the technique of draping takes on an identity of its own. In 2015, indieguerillas initiated the collaborative project Petruk Jadi Supermodel (Petruk Becomes Supermodel) with the label, which was presented in Artjog 2015, Yogyakarta, Indonesia.

Ari Wulu (Indonesia) is a solo electronic music performer also known as midiJUNKIE or WVLV. He has been actively creating arrangements and performing since 1998 and his works have been presented in various events and festivals in Indonesia. Apart from his audio works, he is also the Program Director of SoundBoutique (since 2005) and Yogyakarta Gamelan Festival (since 2009), and is a Board Member of Yogyakarta Art Festival (since 2013).