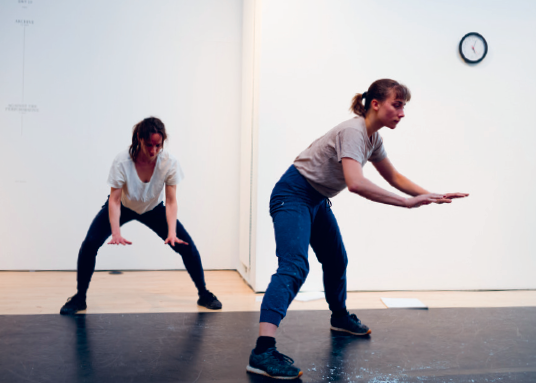 OFFSHORE –
A structure that enables EVERYONE
(some of whom will have met before, some
of whom will not have met) to maintain a
state of rehearsal, over a number of days,
in public.

OFFSHORE IN SINGAPORE is a day-long school, which asks what durations, pragmatics, and cooperative arrangements might upset contemporary, patriarchal states of chrono-normativity and chrono-normative accounts of history. Chrono-normativity, in its simplest terms, may be understood as all life being engineered to run on the same clock: a clock usually set by those in power, to grant control, maximum efficiency, and profit. It is a temporal regime which renders slower and more durational activities such as maintenance and care—crucial to our survival— invisible. Through studying forms of “hidden,” often disavowed time, the school day will open up thoughts around maintenance in correlation to a “continual rehearsal” and the concept of “ongoingness;” forms of practical work that are never “done” and are therefore profoundly reciprocal, as they mould and are moulded by its subjects.

Maggie Segale will be exploring the ways in which a body “keeps count” as an alternative to neo-liberal metrics; the counting, measuring, assessing, and financialising of day-to-day life. Through simple, pedestrian movements Segale will work with the group to realise a stored memory or experience in their bodies (say, frustration in a shoulder, or tension in a hand) and then move with it, to find where time and memory embeds and shapes a present through the body. Jesper List Thomsen will lead a session on how to accumulate language within over time, by sharing several durational pieces of writing he has made, as readings and as a discussion. Cally Spooner will give a lecture on deep time geology and cognitive capitalism.

OFFSHORE is an itinerant performance company and school formed by Cally Spooner to draft new vocabulary and terms of how to organise, work, and perform. “Arriving from literature, theatre, and a messy, unrequited love affair with philosophy, OFFSHORE sits somewhere between a philosophy school for embodied knowledge, an engine, an alibi, a backroom, a rehearsal, and some deliberate, unguaranteed, social plumbing.”

Maggie Segale (United States) is a dancer, artist, and teacher with a focus on performing and interdisciplinary, collaborative work. She graduated from the Juilliard School, where she received multiple awards and fellowships including the 2014 Entrepreneurship Fellowship for her writing on self-image and dance. Segale works with Helen Simoneau Danse, Bryan Arias, and artist Cally Spooner, having collaborated with A24 Films, Center for Innovation in the Arts, Roya Carreras in the upcoming Pussy Riot music video, composer Zubin Hensler, and Matilda Sakamoto. Segale choreographed the opera Role of Reason at the Interarts Festival 2018, and was an Artist-in-Residence at the New Jersey Dance Theatre Ensemble (2016).

Cally Spooner’s (United Kingdom/Greece) absurdist scripts, fictions, and installations render visible the choreography of invisible violence in the digital age, reflecting on the erosion of life in neoliberal and technological milieus. Her comedic and dystopian replays of the political, economic, and media rhetoric of our time act as virulent critiques of corporate performance and “chrono-normative history” alike. Considering these as “corrosive” to both life and utterance, she responds by presenting rehearsals and duration as a mode of resistance. Always “in the making,” each exhibition or work by Spooner is a continuation and rehearsal of the last. Evolved over long periods of time, across a variety of venues, constellations of immaterial and mediated matter arrive through writing, objects, drawing, casts of performers, and sound. Recent solo exhibitions include Centre d’Art Contemporain Genève (2018); Whitechapel Gallery, London (2017); New Museum, New York (2016); and Stedelijk Museum, Amsterdam (2016). Recent group shows include Serpentine Gallery, London (2017) and the Geneva Moving Image Biennial (2016–17). Upcoming shows include Castello di Rivoli, Turin (2018); Swiss Institute, New York (2018); and Art Institute Chicago (2019). Spooner’s book of Scripts was published by Slimvolume in 2016, and her novel Collapsing in Parts was published by Mousse in 2012.

Jesper List Thomsen (Denmark/United Kingdom/ Greece) is an artist and writer. Recent exhibitions and performances include Hollis and Money, ICA, London and Künstlerhaus, Stuttgart; Speak Through You, Hot Wheels Projects, Athens; A Social Body Event, Serpentine Gallery, London; Micro-Composition, Rozenstraat, Amsterdam; The body, the body, the tongue, Reading International; Hand and Mind, Grand Union, Birmingham; The boys the girls and the political, Lisson Gallery, London; and One Hour Exhibition, South London Gallery. A book-length collection of his texts will be published in autumn 2018 by Juan de la Cosa (John of the Thing). He is also a part of the artist collective Am Nuden Da.