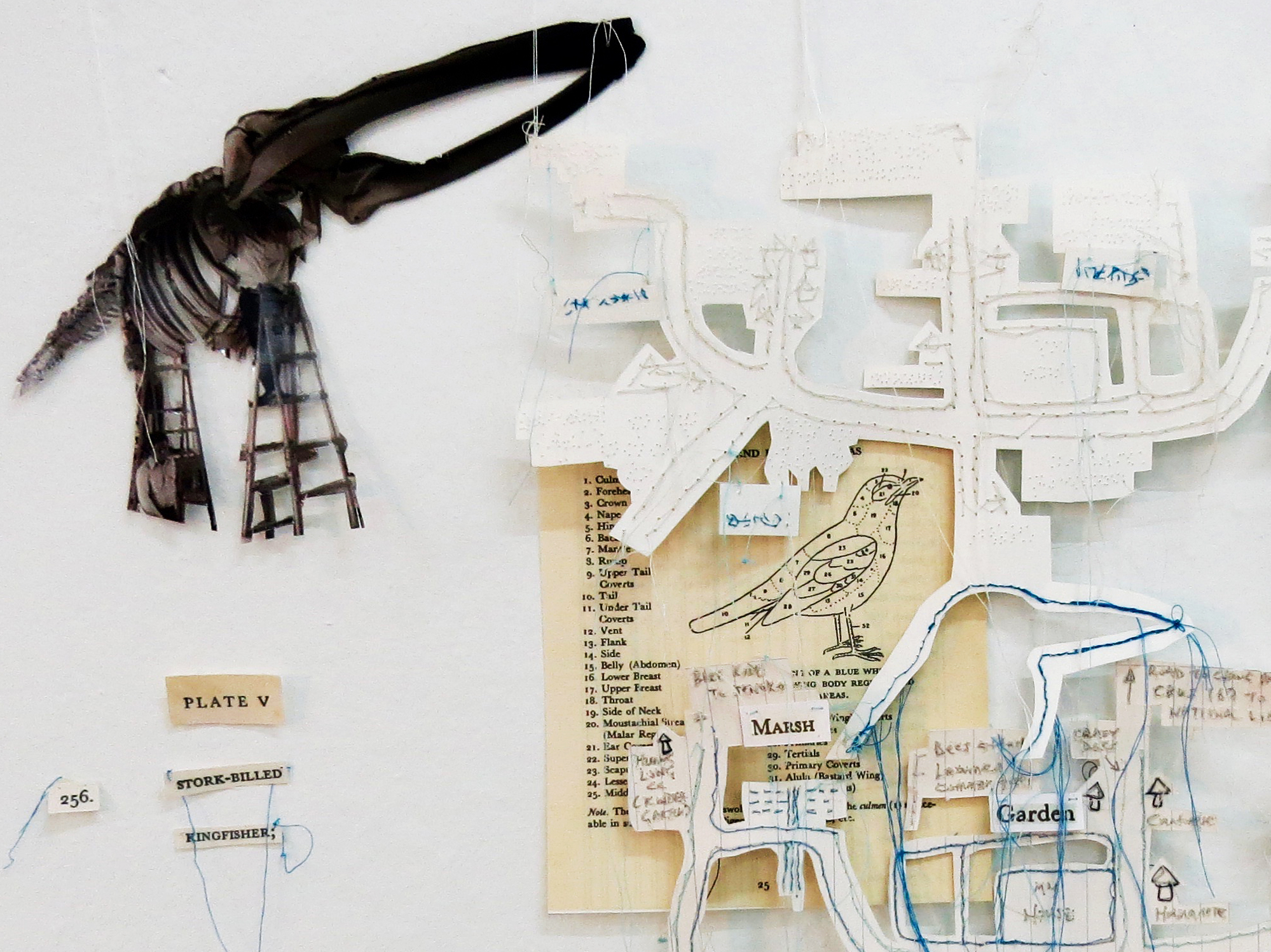 The mixed-media selection presented in The Vitrine stems from Railtrack Songmaps, a project exploring competing claims to nature and culture that resound along the former Malaysian railway tracks at Tanglin Halt. For at least five decades, birds, nature lovers, songbird clubs, tree shrines, kampung gardeners and foragers have roosted and seeded themselves along the tracks, nurturing a tangled patch of urban wild that is currently undergoing redevelopment. The particular constellation of elements on display – photographs, Malay pantuns, embroidery on paper, and delicate airborne assemblages of images, cut-outs and coconut sticks – weave in and out of memories of Lim Kim Seng, who together with his brother Lim Kim Chua, joined the Nature Society of Singapore (NSS) as teenager. Both are now senior members of the NSS Bird Group. Kim Seng assisted The Migrant Ecologies Project in the identification of 105 bird species around Tanglin Halt. In an accompanying soundtrack he recalls how an early encounter with a kingfisher first drew him into a bird zone.

The Migrant Ecologies Project was founded in 2010 by artist, art writer, and educator Lucy Davis. Investigating movements and migrations of nature and culture in Southeast Asia and beyond, the project unfolds through collaborations with sound artists, photographers, scientists, and designers.

Lucy Davis has been an Artist-in-Residence at NTU CCA Singapore from April to June 2017.


Artist and writer Lucy Davis’ interdisciplinary practice examines notions of nature in art and visual culture, science and indigenous knowledge, natural histories, materiality and urban memory primarily but not exclusively in Southeast Asia. Most notably, Davis is the founder of The Migrant Ecologies Project – the product of her longstanding interest in the mid-twentieth century Singapore Modern Woodcut movement which later informed a six-year long, material-led cumulative series of investigations under the auspices of The Migrant Ecologies Project. Davis was also the founding editor of the Singapore critical publication series focas: Forum on Contemporary Art & Society from 2000-2007. She was previously Assistant Professor at School of Art, Design and Media (ADM) at Nanyang Technological University.