And in the Chapel and in the Temples:
research in progress by
Buddhist Archive of Photography
and
Amy Lien and Enzo Camacho

How are aspects of Southeast Asian modern art imaginatively engaged in contemporary practices—by artists, by archivists, and by others? This presentation pairs two ongoing research projects, which draw on histories of modern art in Southeast Asia with radically unlike methodologies: one is archival, yet innovative and unconventional in nature; the other is artistic, yet includes work from archives and involves other kinds of looking. The experimental curatorial juxtaposition of the two projects explores unlikely resonances between them, suggesting unexpected connections across the region, and across times. Among these synergies are the presences of spirituality and the Cold War, and the refiguring of forms and images within differing developments of the modern.

The Buddhist Archive of Photography in Luang Prabang, Laos, has gathered over 35,000 photographs either taken or collected by monks since 1890. The photographs have recently been digitised and catalogued, using innovative methodologies attentive to climatic, cultural, and religious circumstances. This Archive is, therefore, a fascinating instance of specifically 21st-century contemporary practice, as much as it is a unique collection of 19th and 20th-century modern photographs. This is the first time images from the Buddhist Archive of Photography are publicly presented in Asia, outside of Luang Prabang. The Archive has also published a series of bilingual English and Lao research volumes, which are made available in this presentation.

When considering this vast repository of images, several tropes and questions recur. What is photography’s relationship to anicca (impermanence), dukkha (suffering), and anatta (non-self), the three marks of existence in Buddhist thought? What role did Buddhists and photographers play in the Southeast Asian theatre of the global Cold War? And what are the limits of architectural modernity? These questions are explored in three distinct collections of photographs selected for this presentation. The first is a series of portraits of the late Most Venerable Pha Khamchan Virachitta Maha Thera (1920–2007), co-founder of the Buddhist Archive, taken every year from the age of seven until his death. The second selection comprises photographs collected by photographer-monk Pha Khamfan Silasangvaro (1901–1987), which protest the effects of civil war in Laos from 1959 to 1975, as well as photographs taken by another photographer-monk Pha Oun Heuane Hasapanya Maha Thela (1928–1982), who chronicled rarely seen aspects of Buddhist life, such as women’s vipassana meditation retreats. The third selection of images depicts the 1950s modernising renovations of Wat Saen Soukharam temple, under the direction of the late Most Venerable Pha Khamchan. These photographs, and the publications which accompany them, reward historical, spiritual, aesthetic, and other modes of attention and analysis. 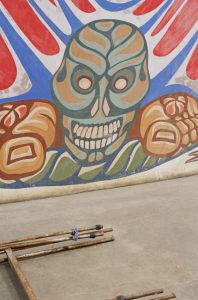 Amy Lien and Enzo Camacho (Philippines/United States/Germany) are collaborating contemporary artists, whose practice often draws on translocational formations of culture and discourse. Within this roving sensibility and method, Lien and Camacho also often engage with Philippine histories and contemporary circumstances. This presentation includes works-in-progress and materials relating to the artists’ ongoing research on the Filipino-American modernist painter, Alfonso Ossorio (1916–1990). Their focus is his 1950 mural, commonly called the “Angry Christ,” painted in a modern chapel located alongside a sugar refinery owned by the artist’s wealthy family, in Victorias, Negros Occidental, the Philippines. It is the first time that work relating to Lien and Camacho’s ongoing research on Ossorio is publicly presented.

Born in the Philippines, Ossorio left when only 8 years old, and his visit to paint the “Angry Christ” mural was his first and only return to the Philippines. In the intervening decades, Ossorio had eventually settled in New York, where he held his first exhibition at Betty Parsons’ celebrated Wakefield Gallery in 1941. He became close to with Jackson Pollock and other artists associated with Abstract Expressionism, a movement which was ideologically charged during the Cold War, due to its covert promotion by the US. Ossorio described his “Angry Christ” mural as an “animated space,” explaining in a 1980 interview that he had attempted to “put as rich an iconography for those who knew and for those who didn’t know… The mural comes to life.” For Lien and Camacho, Ossorio’s mural is a “multivalent cipher,” linked not only to its religious function but also to its economic and environmental context, being located in Negros Occidental, the “sugar bowl of the Philippines,” which produces over half of the nation’s sugar. Lien and Camacho question whether the “Angry Christ” can be “radically reprogrammed” from the specific and highly privileged subjectivity of Ossorio, its maker, and the Ossorio family’s sugar dynasty, its commissioning patron. As well as making repeat visits to the chapel and Victorias over several years, Lien and Camacho have conducted archival research at Ossorio’s alma mater, Harvard University, and at the Ossorio Foundation, New York. They present a mural offering fragmented glimpses of their research notes and work-in-progress.

And in the Chapel and in the Temples: research in progress by Buddhist Archive of Photography and Amy Lien and Enzo Camacho is conceived and organised by Dr Roger Nelson, an art historian and curator specialising in modern and contemporary art in Southeast Asia, and currently Postdoctoral Fellow at NTU Centre for Contemporary Art Singapore and the School of Art, Design and Media, Nanyang Technological University, Singapore. The presentation draws on Nelson’s ongoing art historical archival research in the Buddhist Archive, and his ongoing curatorial dialogue with Lien and Camacho.

Presented as a Fringe Programme of the 6th Singapore International Photography Festival.