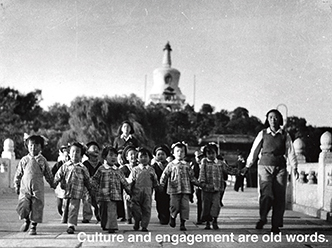 The idea of “country” powerfully embodies notions of identity, belonging, community and genealogy. When viewers engage global contemporary art, there is often the reflex to locate the artist by ethnicity and geography. Today, many artists seem burdened, perhaps unduly, to represent their place in the world. An individual artist may always speak from a place, but must he or she always speak about it? While the title of the exhibition, No Country may appear as if to negate country and nation, the aim of the forum is not to make declarations but rather to raise questions for discussion and dialogue.

The Otolith Group is a London-based artist collective, whose work Communists Like Us featured in the exhibition interweaves a dialogue on the subject of political action taken from Jean- Luc Godard’s 1967 film La Chinoise with images belonging to the photographic archive of Anasuya Gyan-Chand, Sagar’s grandmother. The documentary images depict encounters between Indian politicians and activists from the Soviet Union, China, Japan, and other countries in Asia during the mid-to-late 1950s and early 60s, and attest to the extensive nature of such relationships in postwar Asia

Marian Pastor Roces is a cultural critic and independent curator whose research interests include cities, international contemporary art events, museums, 19th-century expositions and the politics of nature She has been awarded a grant to convene an international conference in the politics of beauty by the Prince Claus Fund, was selected by the Japan Foundation to be apart of the Asian Leaders Fellowship Programme, and was a member of an evaluation team sent to the Dakar Biennial by the Mondrian Foundation.

T.K. Sabapathy is an eminent art historian, curator and critic. His body of writing includes important contributions to the art histories of Singapore, Malaysia and Southeast Asia, as well as artist monographs and art criticism. He has curated major exhibitions at venues such as the Singapore Art Museum and the ADM Gallery at Nanyang Technological University, Sabapathy is the first Research Fellow at NTU CCA Singapore, and an Adjunct Associate Professor at the National University of Singapore. He also lectures at Nanyang Technoloical Univeristy.

June Yap was selected as Guggenheim UBS MAP Curator, South and Southeast Asia, in April 2012. An independent curator since 2008, Yap has also organized exhibitions including Ho Tzu Nyen for the Singapore Pavillion at the Venice Biennale in 2011: You and I, We’ve Never Been so Far Apart: Works From Asia for the Center for Contemporary Art, Tel Aviv; The Future of Exhibition: It Feels Like I’ve Been Here Before at the Institute of Contemporary Arts Singapore, and Bound for Glory at the National University of Singapore Museum.