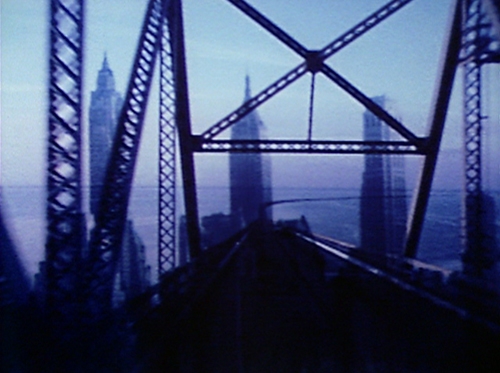 This film explores the architectural idea of metropolitan bridges both visually and acoustically, highlighting their monumentality in the process. Detailed images of abstract patterns and geometrical curves, elevated to eye-level, move in a fast-paced rhythm. As they lead the audience through a suspended, hypnotic journey connecting one point seamlessly to another, they sometimes super-impose on one another or against an urban skyline and juxtaposed with a background that ranges from sepia tones to cellophane colours. The film plays twice, first with jazz-like music by Teo Macero, followed by an electronic score by Louis and Bebe Barron that creates an almost eerie atmosphere.

Not only is this film a performative work of Gordon Matta-Clark, it is also a documentary on derelict sites. It begins with an old man and a child rummaging through trash under a bridge, followed by Matta-Clark building a small wall made of rubbish, waste paper, and tin cans collected from the area. A boy beside Matta-Clark makes a fire with sticks, but the fire is put out after presumed intervention by the police. The film then ends with Matta-Clark covering his wall with printed comics. It was created for Brooklyn Bridge Event, a four-day festival held in 1971.

In this film, Ko Nakajima and Video Earth Tokyo interview a homeless man. Although he appears hostile and frustrated initially, he gradually opens up and shares about his life. The film was later broadcast on cable television.

Railroad Turnbridge, one of the most avant-garde films of the period, is an investigation of what “bridgeness” means to Richard Serra. It records the bridge opening, closing, turning, locking, and unlocking as they coincide with movements of the camera. The film begins with the open end of the railroad acting as a viewfinder, where the landscape captured within it changes like a slow-moving film strip. It then cuts to details of the bridge’s steel structure, emphasising its materiality. As scenes of the railroad alternate with close-up shots of its structural components, the viewer experiences the bridge’s sense of space as a form of dwelling.

This film investigates the concepts of identity and place using the Brooklyn Bridge, a landmark of New York City, as an object of study. Using the transformative power of its medium, the film fuses photographs, live video, and superimposed drawings created on a Quantel Paintbox to emphasise the cryptic strength and naturalistic beauty of the bridge. This is intensified by the artist Joan Jonas scripting herself as a performer in the film.

Shirley Clarke(United States) was an esteemed figure in the American avant-garde cinema of the 1950s and 1960s, and a pioneer of video in the 1970s. She brought a distinctive aesthetic of “choreography of images” to her work as a trained dancer and manipulated image, time, and space by applying choreographic editing and technical effects as a dramatic, expressive language. She co-founded Film-Makers Cooperative and Film-Makers Distribution Center in New York, which offered alternative distribution methods for independent filmmakers. She was also the winner of an Academy Award for her 1964 documentary film Robert Frost: A Lover’s Quarrel With the World.

Gordon Matta-Clark(United States), originally trained as an architect, was one of the most influential post-war artists. He is best known for subverting architecture and urban landscape with geometric interventions of “building cuts,” converting them into gravity-defying and disorientating walk-through sculptures. His work is seen not only as a rejection of the architectural profession but also as new modes of contemporary artistic expression. “Anarchitecture,” which became the name of an artist group of which he was a member, and the title of a 1974 exhibition from the group’s discussion around the dematerialisation of the art object and activation of space and place, was attributed to him.

Video Earth Tokyo(Japan) is a community-oriented video art collective serving as a network for people making video in Japan. It was founded in 1971 by Ko Nakajima, a pioneer of video art and computer animation. He recorded local communities, social activities, interventions, and performance experiments using a portable video recorder—a communication tool employed by the collective to promote communal awareness. The collective broadcast their documentaries and experimental works on cable television and participated in international exhibitions as well as computer graphics conferences.

Richard Serra(United States) is one of the most preeminent and visionary artists of his generation. In the 1960s, he and other Minimalist artists employed non-traditional, industrial materials to emphasise the materiality of their work. He subsequently expanded his spatial and temporal approach to sculptures to large-scale, site-specific work, of which his arcs, spirals, and ellipses are most renowned. These monumental works engage their viewers as they are experienced in situ. In 1968, he produced his first short film and experimented with video in the 1970s. Serra has held numerous museum shows and participated in important international exhibitions around the world.

Joan Jonas(United States) is one of the most significant video and performance artists and important female artists active in the 1960s and 1970s. She pioneered the use of the two genres in visual art and was influential also in other art forms. Incorporating different media, she presents multiple viewpoints and layers of material, texture, and meanings in her work to address current issues. In 1972, she began producing video works that were ground-breaking in emphasising the experience of the medium as a conceptual device and is known for merging various genres in her fragmented video narratives.