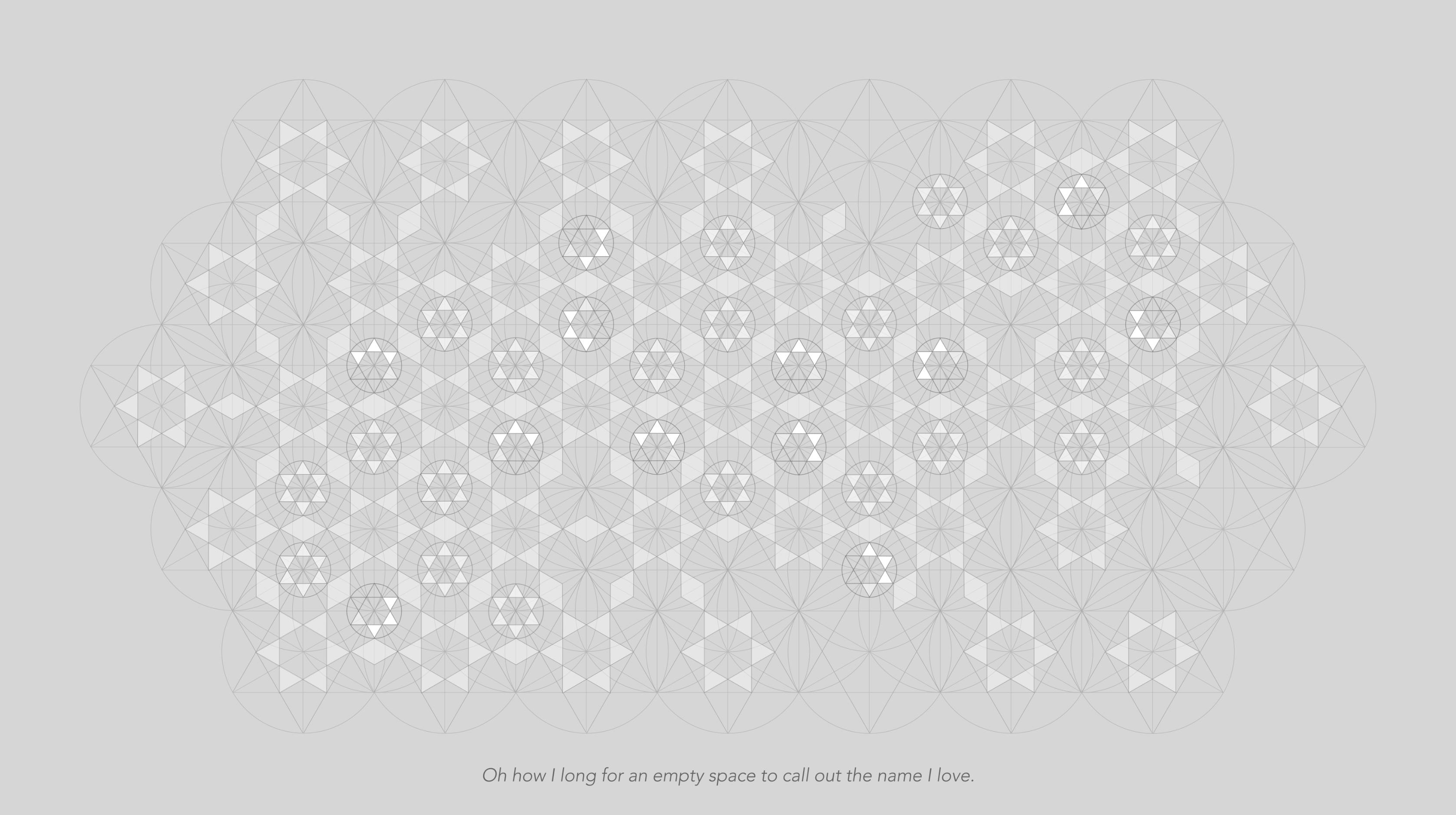 Co-produced by NTU Centre for Contemporary Art Singapore and Thyssen-Bornemisza Art Contemporary (TBA21) for st_age, an online platform for new commissions initiated by TBA21 as a response to the Covid-19 crisis. It is a provocation to artists, institutions, practitioners, and activists to engage with the many issues that the pandemic has made even more visible in the precarious current moment.

In the empty expanse of the screen, a delicate pattern of straight lines and curved shapes is slowly traced by an invisible hand. In Islamic visual culture, where figurative representation is notoriously forbidden, abstract geometric compositions chart spiritual journeys and convey ideals of cosmic interconnectedness. The pattern created by Dana Awartani for Listen to my words is inspired by the ornamental motifs of jali and mashrabiya, latticed screens used in traditional Islamic architecture to regulate light, airflow, and heat in the arid climate of many Middle Eastern countries. Besides this climatic function, jali also play a socially and visually divisive role, marking the confinement of women within the domestic sphere and the impossibility of seeing them clearly.

The entrancing emergence of the geometric design becomes progressively tangled with the voices of modern-day Saudi women that the artist invited to recite a selection of verses. The selected poems were written by Arab poetesses from the pre-Islamic era up to the 12th century, and reflect the significant but scarcely documented tradition of women’s poetry in the Arab culture. They relay first-person expressions of longing, yearning, and pride penned by women who, in different eras and in different corners of the vast Arab region, found similar strength and empowerment in their bodies and audaciously reversed the male-dominated discourse of desire.

By interlacing geometric symbolism and poetic utterances, Awartani’s digital animation unleashes these powerful voices once again and orchestrates an intergenerational dialogue that subtly questions the status of women in contemporary society.

Listen to my words developed from a multimedia installation of the same title realised in 2018.

Ranging from painting and sculpture to performance and multimedia installation, the artistic practice of Dana Awartani (b. 1987, Saudi Arabia/Palestine) imbues forms, techniques, concepts, and spatial constructs that define Arab culture with contemporary awareness. The timeless relevance of forms and the wisdom embedded in traditional crafts are harnessed to tackle issues of gender, healing, cultural destruction, and sustainability in a constant effort to straddle continuity and innovation, aesthetic experimentation and social relevance. Past solo exhibitions include The Silence Between Us, Maraya Art Centre, Sharjah, United Arab Emirates (2018) and Detroit Affinities: Dana Awartani, Museum of Contemporary Art Detroit, United States (2017). She has participated in numerous group shows and biennales such as Museo Nacional Thyssen-Bornemisza, Madrid, Spain (2020); Kochi-Muziris Biennale 2016, Kochi, India and the 1st Yinchuan Biennale, Yinchuan, China (both 2016), among others.

Image: Dana Awartani, Listen to my words, 2020, animation and sound. Courtesy the artist and Ali Alsumayin.