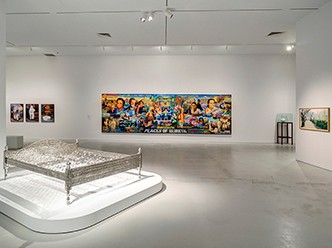 The title of No Country draws from the opening line of a poem by William Butler Yeats, “Sailing to Byzantium” (1928), which was adapted into a contemporary thriller by Cormac McCarthy, No Country for Old Men (2005), and presented in filmic form by the Coen Brothers (2007). No Country: Contemporary Art for South and Southeast Asia appropriates the historical, geographic and intertextual traversal of Irish poem, American novel and film to an exhibition on Asia, and in so doing references the traces and overlaps in the exchanges and adaptations that are characteristic of the histories and cultures of the South and Southeast Asia. While appearing as if a negation of country and nation, No Country rather gestures to an exploration of the problematic nature of the cartography of nation and culture. In this talk, No Country curator June Yap and Zoe Butt from Sàn Art, explore curatorial strategies in negotiating contemporary mappings and representations of Asia today.

Zoe Butt is Executive Director and Curator of Sàn Art, Ho Chi Minh. From 2007 to 2009 she was Director, international Programs, Long March Project in Beijing, and from 2001 to 2007 she was Assistant Curator, Contemporary Asian Art, Queensland Art Gallery, Brisbane, where she assisted in the development of the Asia-Pacific Triennial of Contemporary Art. Butt is also presently working on her Ph.D. with the Centre for Contemporary Art and Politics, National Institute for Experimental Arts, College of Fine Arts, University of New South Wales, Sydney.