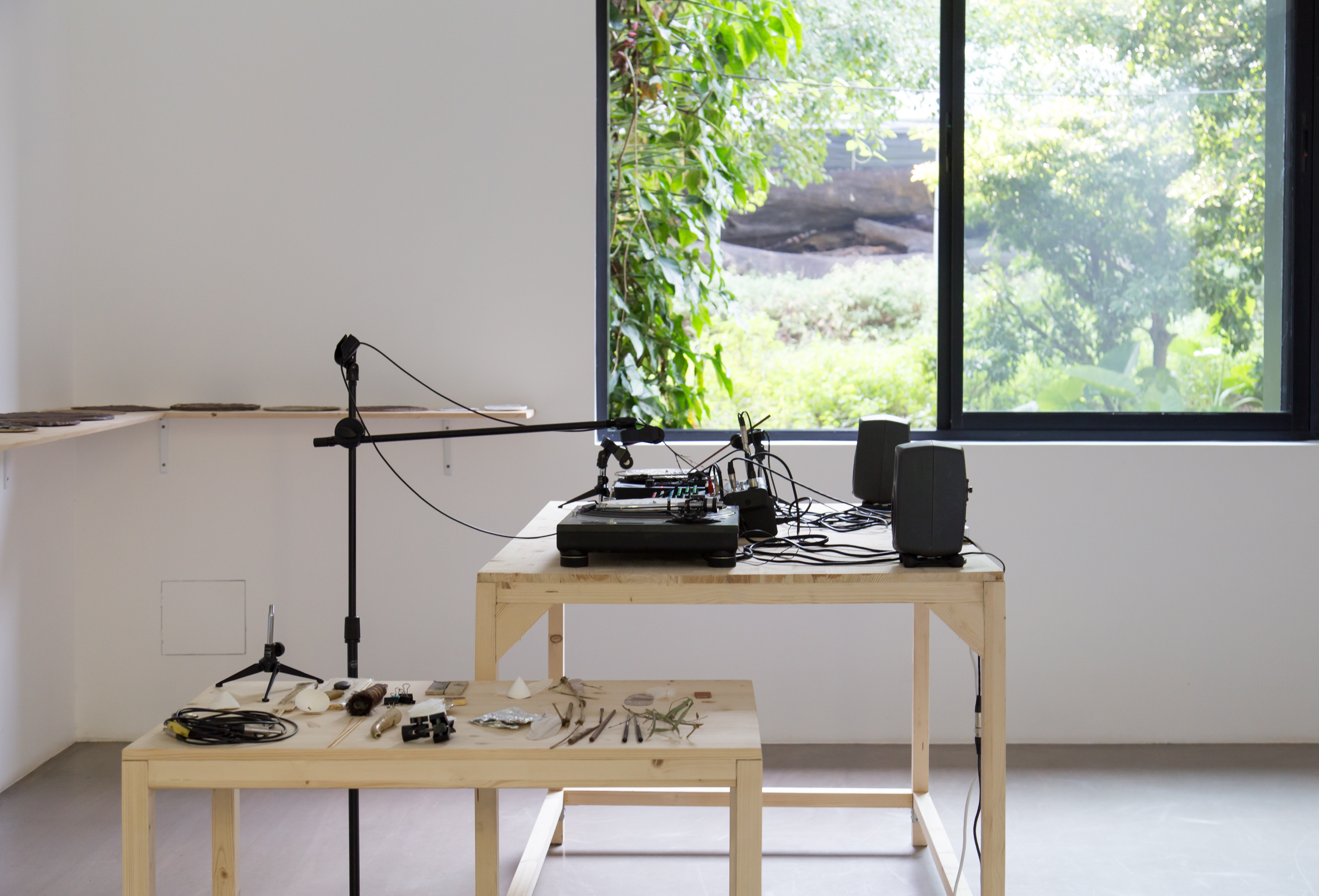 Part of Art Day Out! x The School Holidays Edition 2018 at Gillman Barracks

Derived from the sonic exchanges that will take place throughout the course of the exhibition between Tarek Atoui’s guest hosts—Vivian Wang, Mark Wong, and Yuen Chee Wai—this series of performative situations are conceptualised as an open invitation for other invited performers to use the exhibition space as an experimental platform. Each of the evenings will be the result of an exchange between the performers and the three guest hosts.

Dharma (Singapore) experiments with electric guitar, incorporating effects and objects together with various extended techniques. After seven albums with avant-rock band The Observatory, Dharma’s solo debut in 2013, Intergranular Space, opened up new vistas for his guitar work. He has been involved in various experimental and improvised music performances most notably at the Asian Meeting Festival 2016, which featured notable Asian improvisers like Otomo Yoshihide and Jojo Hiroshige.

Bani Haykal (Singapore) is an artist, composer, and musician. Haykal considers music (making/process) as a metaphor for cybernetics. His projects revolve around interfacing and interaction in feedback/feedforward mechanisms. An artist-in-residence at NTU CCA Singapore (2015), he is a member of b-quartet and Soundpainting ensemble Erik Satay & The Kampong Arkestra.

Wu Jun Han (Singapore) creates and performs in the audio-visual, and has a background in video art. Through an interdisciplinary approach to performance, he explores the visceral, materiality, vernacular practices, and the future. For State of Motion 2018, he presented a sound work in response to Shaw Brothers films 1950–70s from Singapore. He was an artist-in-residence in Pulau Ubin, organised by The Artists Village, where he installed a makeshift photography lab (2012).

Yuen Chee Wai (Singapore) is a musician, artist, designer, and curator. He is a founding member of FEN (Far East Network) and Project Director of the Asian Music Network, where he co-curates the annual Asian Meeting Festival in Japan. He is a member of the avant-rock band The Observatory, where he plays guitar, synth, and electronics.

Tini Aliman (Singapore) is a sound designer, artist, audio editor, and field recordist. She was the sound designer for Geng Rebut Cabinet by Alfian Saat, part of W!ld Rice (2016), and Charged by Chong Tze Chien, Singapore Theatre Festival (2011). Most recently, she designed the sound for Angkat, a production from Teater Ekamatra’s Artist Residency Programme, which was nominated Best Sound Design for Life! Theatre Awards 2018.

Cheryl Ong (Singapore) is a percussionist active in music performance and education, regularly performing with avant-rock group The Observatory and SA, a trio that uses traditional Chinese instruments with modern sensibilities. A recipient of the National Arts Council Arts Bursary (Overseas), Ong graduated from the Central Conservatory of Music, Beijing, with a degree in Chinese Percussion. Though classically trained, Ong consistently struggles with the division of classical and traditional music and the limits of their roles.

The Analog Girl (Singapore) started out as a lo-fi bedroom project using portable synthesisers and cassette tape recorders, having evolved into a universe of dreamlike technicolour pop. She creates and performs using a myriad of illuminating electronic instruments including the Tenori-On, Monome, and Percussa AudioCubes. She has been named by TIME magazine as one of 5 Music Acts To Watch in 2008.

Vivian Wang (Singapore) diverged from her formal training as a classical pianist when she started the avant rock outfit The Observatory in 2001. A former TV producer-presenter as well as a film music supervisor, Wang focuses solely on music, performance, and interdisciplinary work since 2008. She performs on synth, keyboard, voice, and percussion, and tags Alice Coltrane, Robert Wyatt, Mark Hollis, Bill Evans, and Annapurna Devi as her all-time favourite musical heroes.

Zai Tang (United Kingdom/Singapore) experiments with the abstraction and visualisation of field recordings from natural environments, combining these sonorities with drawing, animation, projection, and performance to create immersive and reflexive experiences. He presented solo and collaborative work at Singapore International Festival of the Arts (2017); National Gallery Singapore (2017); Esplanade’s da:ns Festival (2016/2013); IFA Gallery Berlin/ Stuttgart (2015); the 56th and 52nd Venice Biennale (2015 and 2007), in collaboration Charles Lim and Tang Da Wu respectively, among others.