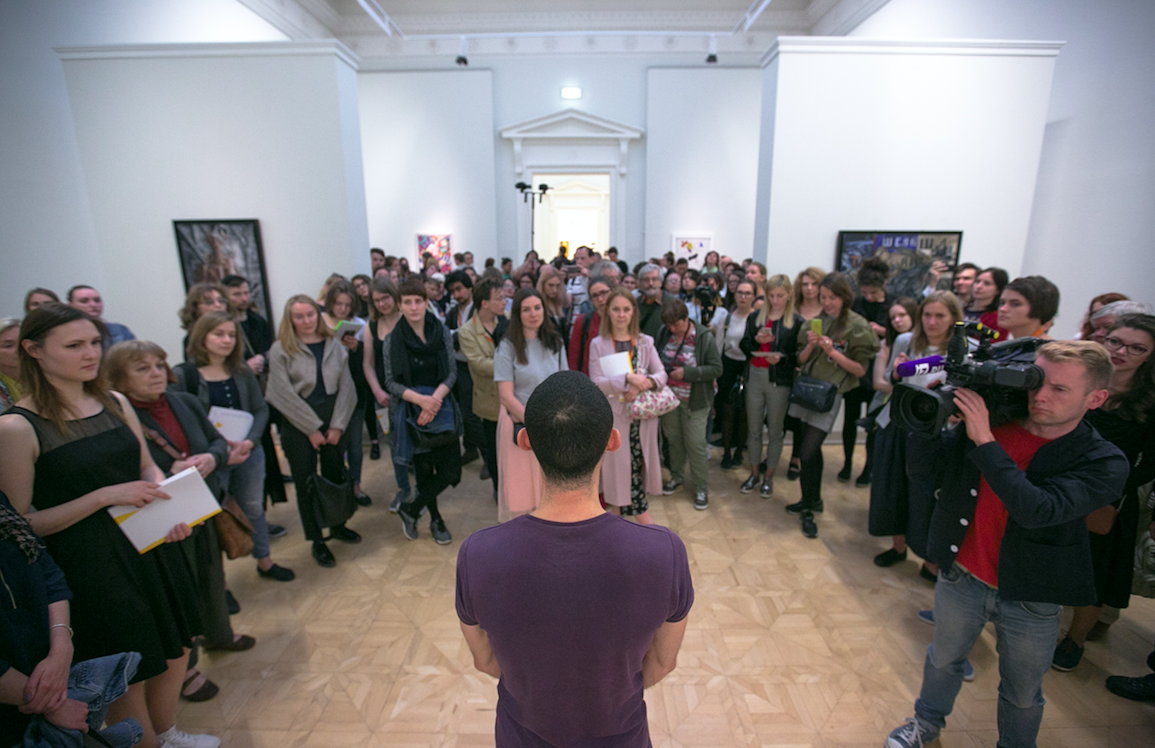 Behind the Scenes: artist Alexandra Pirici and dancer Farid Fairuz

The Single Screen, Block 43 Malan Road
Artist and choreographer Alexandra Pirici will speak about the basis for Re-Collection (2018), the performative exercise developed for Stagings. Soundings. Readings. Free Jazz II. This exercise explores how performing bodies can reflect memories of nature, culture, and life on earth. Pirici and dancer Farid Fairuz will share about the fluid and dynamic process of exchange that occurs between the dancers while they influence each other and decide on configurations, arrangements, and sequences.
Moderated by Ute Meta Bauer, Founding Director, NTU CCA Singapore and Professor, School of Art, Design, and Media, NTU and Susan Sentler, choreographer and educator

Farid Fairuz (Romania) reinvented himself, assuming a fictional biography. Previously working as the artist Mihai Mihalcea, he was one of the most active in the field of contemporary dance in Romania, after 1989. He has been part of many of the projects that led to the international recognition of Romanian contemporary dance and he played a key role in the establishment of structures and institutions that have become landmarks of this area. Between 2005 and 2013, he was Director
of the National Dance Center in Bucharest.

Alexandra Pirici (Romania) is a classically-trained dancer and choreographer who naturally transitioned into the art world as her works grew increasingly experimental. Her performative installations straddle contemporary dance, performance, body art, and sculpture, while acknowledging the dramatic shifts in contemporary understanding of labour and the body, revealing the influence of present geopolitical realities. With choreographed pieces that work undisciplined, spanning across mediums and spatial contexts, Pirici addresses ideas of history, collective body, the rise of technology’s agency over the “human,” and the invisible structures and hidden mechanisms of power. The artist’s use of the human living body as a medium is a reflection on and exploration of such ideas and their impact on the “human” subject. Pirici has exhibited widely, including at the decennial art exhibition Skulptur Projekte Münster 2017; the Romanian Pavilion at the 55th Venice Biennale; Tate Modern, London; New Museum, New York; the 9th Berlin Biennale; Manifesta 10; Centre Pompidou, Paris; Museum Ludwig Cologne; Neuer Berliner Kunstverein, Berlin; the 12th Swiss Sculpture Exhibition; the Van Abbemuseum, Eindhoven; Hebbel am Ufer, Berlin; and the Museum of Modern Art, Warsaw; among others. In 2015 she received the Excellency Award from the National Dance Centre, Bucharest.

Ute Meta Bauer (Germany/Singapore) is Founding Director, NTU CCA Singapore and Professor, NTU ADM. Previously, she was Associate Professor in the Department of Architecture at Massachusetts Institute of Technology, Cambridge, where she also served as Founding Director of the MIT Program in Art, Culture, and Technology. For more than three decades, Bauer has worked as curator of exhibitions and presentations, connecting contemporary art, film, video, and sound through transdisciplinary formats. She publishes regularly on artistic and curatorial practice. Bauer served as expedition leader of TBA21–Academy The Current 2015–18 exploring the Pacific Archipelago and littorals that are most impacted by climate change and human interventions in their environments.

Susan Sentler (United States/United Kingdom/Singapore) is a choreographer, teacher, researcher, director, dramaturg, and performer. She was senior lecturer at Trinity Laban Conservatoire of Music and Dance for 18 years and has taught globally in the field of dance for over 30 years. Sentler performed with the Martha Graham Ensemble, and has recently returned to performing in works by artists such as Tino Sehgal, Xavier le Roy, and Jérôme Bel. Her multi-disciplinary practice is anchored by a honed somatic relationship to image, working in gallery and museum contexts to create “responses” or “activations” for specific visual artworks as well as generating personal durational installations. She is a lecturer at the School of Dance & Theatre at LASALLE College of the Arts, Singapore.